Mark Williams spent the first twenty-one years of his career as a Special Agent for the Special Investigations Section of the Organized Crime Division of the State Attorney General’s Office. As part of his duties, he investigated organized crime, homicides, supervised task forces, and fraud cases submitted by other agencies to that office or generated by the office itself, working solo or in coordination with other state and federal law enforcement agencies.

Mark was also an instructor specializing in defense tactics, specifically close quarter issues. His training course was appropriately nicknamed ‘Close Quarter Crisis Management.’ Dealing with defensive responses to life-threatening events. He has traveled across the United States as an instructor for law enforcement in various capacities as well as being published in national law enforcement journals.

After he retired, he became a high school English teacher at an inner city school in central Phoenix. He has been the crisis coordinator for the schools he has worked at and asked by college and universities to write curriculum for law enforcement as part of their ongoing training protocol, as well as continuing education requirements. He has also designed classes for universities for educators in the area of school crisis events.

Mark has been married for  thirty-seven years, has three children, and eight grandchildren. He currently resides in Phoenix. 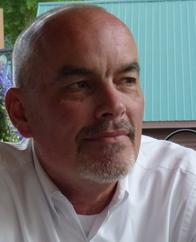